Message from the President

Founded in 1880, Senshu University marks its 137th anniversary this year. The University’s four founders—Nagatane Soma, Inajiro Tajiri, Tanetaro Megata, and Shigetada Komai—studied abroad at Columbia, Yale, Harvard and Rutgers Universities in the U.S., respectively. Returning to Japan, they founded Senshu Gakko (Senshu College, which later became the present Senshu University), seeking to give back to society by sharing what they had learned in the fields of economics and law. At the time, state-run colleges presented two major hurdles for students—high tuition fees and requirements that students master Western languages and be familiar with Western texts.In Senshu Gakko’s Purposes for Establishment, the four founders made clear the significance of establishing the school: namely, to remove these hurdles and attract students with a strong desire to learn. Our founders’ mission was to provide professional education in the Japanese language to foster the kind of talented people who would be ready and able to build a modern nation-state. 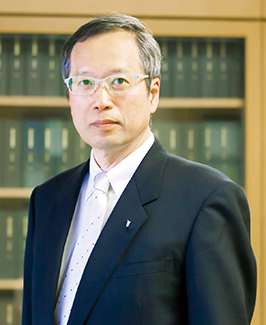 In its 137 year history, the path has not been entirely smooth for Senshu University. The University has faced painful periods, including the Great Kanto Earthquake of 1923, the devastation of World War II, and the Great East Japan Earthquake of 2011. Thanks to the passionate commitment the founders left for us when establishing the University, and to the dedication of all the faculty members and administrative staff, alumni, students, and parents through the years, Senshu overcame every difficulty and recovered completely from each disaster it faced. I am honored to have succeeded Professor Kenichi Yano as president of Senshu University, and I intend to keep this academic torch burning bright and deliver it safely to the next generation.

In the post-war years, the Cold War between East and West lasted some 44 years. Since its end, the world has witnessed an age of decentralization and, more recently, diversification of centralized functions. With various international conflicts and ethnic struggles underway, as well as religious antagonism and cultural conflict, the degree of turmoil in our world seems to be on the increase.

At Senshu University, we have propounded the “Development of Socio-Intelligence” as our 21st century educational objective, and I believe this is a fitting goal for a higher educational institution in the new age we face today. In focusing on socio-intelligence, we aim to assist students to acquire the capacity to discover for themselves the various challenges emerging in contemporary societies and find ways to resolve them.

Toward this end, we introduced a new undergraduate educational program in April 2014. This program reorganizes the conventional undergraduate educational faculty comprising the two fields of Liberal Arts Education and Specialized Education into four fields—Changeover Education, Introductory Education, Liberal Arts Education, and Specialized Education. This restructuring allows students, regardless of their field of specialization, to acquire the intellectual capability to thrive in today’s increasingly diverse societies. Subjects in these four courses have been organized to ensure that students will be able to progress smoothly from foundational studies to the advanced level. With this new structure, we are committed ourselves to promoting an undergraduate educational program that meets the challenges of our times.

The upgrading of campus facilities is an essential aspect of university development. To help meet the needs of today’s age of globalization, the Kanda Campus Building 5, with its pioneering active learning facilities, and the Ikuta Campus International House were completed in 2014. By the end of 2016, construction will be completed on the new Building 2 (working name), which will be equipped with an active learning studio and learning theater, and the new Building 3 (working name), which will be the primary location for graduate school studies. These new facilities are scheduled to open in April 2017. Also, to mark the upcoming 140th anniversary of Senshu University, a new building along Yasukuni-dori on the Kanda Campus is currently in the planning stages.

As we approach the 140th anniversary of our founding, we are also focused on establishing new departments and designing new courses. Our overarching policy is to establish a new international department on the new Kanda site, to relocate the School of Commerce to this campus, and to reorganize the School of Letters and establish a Department of Journalism. We are dedicated to pursuing steady reform in tangible and material ways, which includes providing support to existing academic departments for their pursuit of new challenges.

True to our vision for Senshu University in the 21st century, we enthusiastically embrace the challenge of developing socio-intelligence in our students. We will continue to enhance our educational and research capacity to deliver this outcome in order to build a foundation that positions the University for a new era of growth.